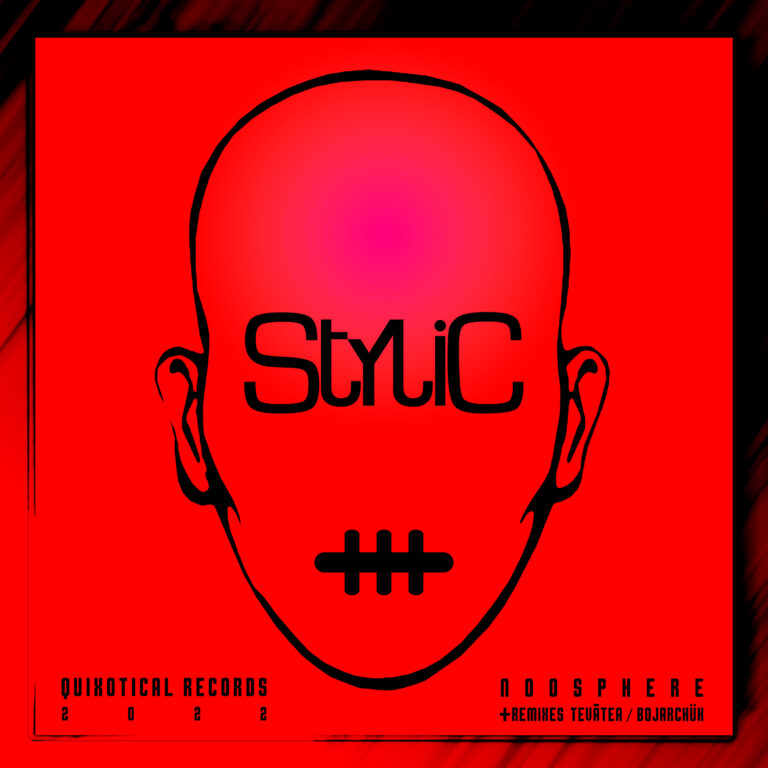 Quixotical Records presents the 7th official release which comes from very experienced producer from Spain – STYLIC. He brings out slow-tempo “NOOSPHERE” EP with four original tracks and 2 remixes from dark disco prince Tevātea, and dark electronic
ambassador Bojarchük.
EP begins with “Frontera Industrial” original track. If by any chance this track was a horror flick, there would be parts, begging to be censored. This track is both suggestive in its variety of themes lurking behind every corner as much as it is submissive to the boundaries of its own affection. “Frontera
Industrial” is something that you will find familiar and ultimately captivating to one of those 80’s or 90’s TV theme tracks, once you hear them, you can’t shake them off.
The second is the title track “Noosphere”. Noosphere is a brilliant track, it focuses on a broader range of information, that gives us access to more
alternatives and diverse interpretations of not only the events that are apparent in our lives but also about the environment that surrounds us and how inconsistently our mind works in specific situations when external factors exercise intervention of its own. This track represents everything what is mentioned above and the overall vibe truly represents the meaning of the whole EP: noos – mind and sphaira – sphere.
The track “Robots Among Us” is composed so deliberately, the sound effects, in particular, has these layers of terror hidden within themselves, creating this idea of “what if”, soon after escalating into this unspeakable discomfort, panic surrounded by uncertainty. Thanks to the craftsmanship of Stylic, this phrase becomes more like a warning, rather than an object of mockery. Given the name of the song, it’s more than clear, that we’re talking about the technological singularity, when technological growth becomes uncontrollable and irreversible, resulting in unforeseeable changes to human civilization.
But somehow, this adaptation handles it, as a good thing, like you should be utterly proud and somewhat satisfied with the current setting. Naturally, it is difficult for anyone to predict what humans live would be like in a post-singularity world…Treat your robots right, they might spare your life…
Amazing dynamic down-tempo masterpiece for various dance floors. Choosing a name for a track is as important as making a track, that lives up not only to the expectations of the producer but also to the name that’s been
given to a track itself. “Ether” – meaning sky or heaven is a suitable description, so as “white noise” would be. Both of them share similar characteristics.
Like sky has a dozen of overlays, it is never 50 shades of blue. It is a mixture of unexplored space regions of the universe beyond the terrestrial sphere.
White noise is a type of noise that is produced by blending sounds of various frequencies together. Basically, if I had to use a term to define this particular tune, I would say – static. And that is as obvious as it gets right? But don’t forget yet what has just been mentioned, the track itself is not as plain as
“static” suggests. It takes creativity and dedication to actually make something like this – work. And the fact that it can ignite curiosity and references to
certain mediums just proves the point. Incredible how Stylic managed to turn this vibe and all the sounds into a story that becomes real every time you
turn on loud this track.
“Robots Among Us” Tevatea’s remix – slow, strict and petrifying march, imitation of our primitive behavior, a work that is intended to ridicule the
shortcomings and antics of once dominant species. An absolute opposite to the original, this rendition is saturated with post-apocalyptic themes. This
remix draws us a nice image with unpleasant and ghoulish elements of our heavy-hearted existence. Unlike it’s predecessor, this composition, has no indication or desire to come out as a dark and threatening message, it doesn’t have to. Because it is more like a revelation with a whip of banter, lashing at us, while we try to reconcile with the strangeness and absurdity of this purgatory, that in a way, we crafted ourselves.
It is the fact that Bojarchük has developed a very strong sense of what we’d like to call “jump scares on my terms”. Nobody knows how he does it, but he can make any sound intimidating. Probably he can take the sweetest lullaby and transform it into a horror show, so gruesome and shocking, you’ll have
night terrors for the rest of your life, and we are not even talking about the countless therapy sessions you’ll be having and mountains of bills to pay, following your disturbing experience. Bojarchük knows how to get in touch with timing these moments, percussion, for instance, feels like a needle
puncturing your skin and that is as notable as everything else he does in this track. He is simply sharpening a knife that is already sharp enough and ready to be used. “Ether” remix is more obvious, more explicit compared to the original. In a way it’s a shapeshifter and knowing the true nature of this
mythological creature, the depiction becomes even more eerie than intended.