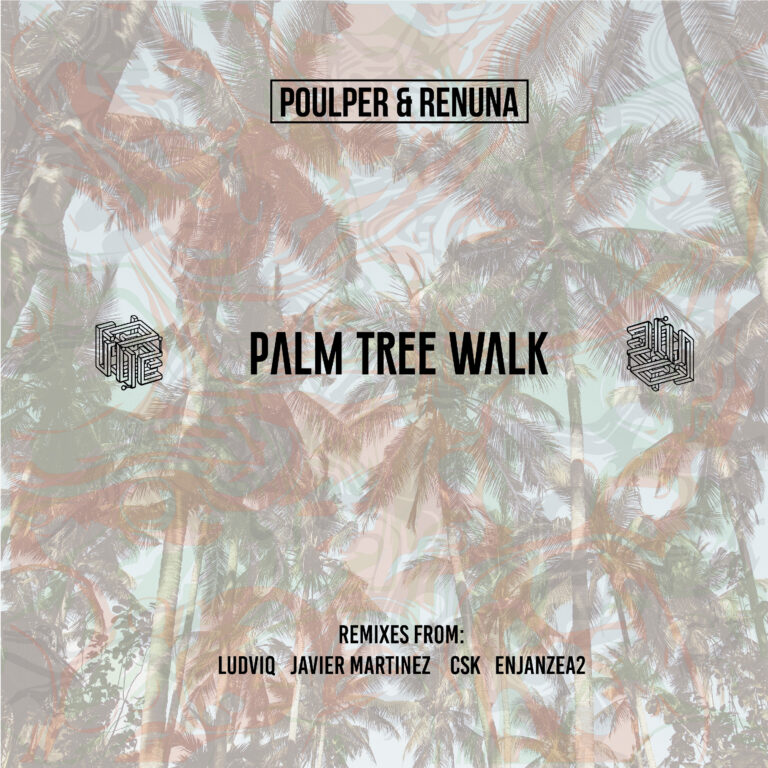 The first release of the year on the Bonkers Records arrives, welcoming new staggering members to the label, from Argentina: Poulper & Renuna.
POULPER producer, manager & co-founder of Quixotical Records and RENUNA duo formed by producer and live performer Cali Burton Y Tots, part of Logia family…“Palm Tree Walk” is their new Ep made up of two powerful originals and four massive remixes.

“I gotta be honest with you, the first time I listened to the latest EP by Poulper & Renuna, I was lost. For some unknown reason, I didn’t get the song. Then I listened again and again and my head was still empty, I didn’t get triggered, that was weird. So I said to myself, ok, I guess it’s time to give it a rest, just for a few days. Don’t think about it and certainly don’t push it, let your mind put those pieces together, even though you can’t see or hear them at the moment, but they are always there. So I took my time, played some video games, watched some movies, read something about someone, I tried to be a bit distant, but this track was still in the back of my head, I couldn’t get it out. And a sole reason for that was because I couldn’t fully understand it. All this time in between, ever since I’ve heard this remix, I’ve never, even once, considered using a different approach. Then I recognized how backwards my thinking was, I anticipated one thing and I wanted it
to be this one thing, but it wasn’t. Perspective is everything. Depends on where you stand, right? And once I moved my feet, I learned how conventional this song is, not to mention that it is multi-dimensional. It’s like reading a book and thinking to yourself, it’s about this one thing, it has only one theme and then – boom, your brain is like, hey, I noted something, I’m pretty sure you didn’t miss it intentionally, it’s chapters and clearly every chapter has its own theme, a message. Of course, you get embarrassed at first, but then later, you’re like, wow, devil’s in the details, right? Everything is important. This track is coated with this protective shield, a comfort zone of its own, but it tends to break it. What I’ve noticed is that there’s a strong sense of evolution going on here, in a way it’s like a jellyfish. What I mean by that is, that it reaches its peak and then goes back to its primal form, then after a while, it does it again, by that time, it advances and gains this new form, it is never the same. It happens several times during this song and that is fascinating and beautiful. But given the nature of the genre itself, this, so-called “progress” is nonetheless unpredictable, no matter how exciting and joyful it may seem, it still grants you with this dubious feeling, you find yourself shaken by this instability, panic starts to play tricks on you and gradually all your concerns, finds their rightful place in your head. Charming, yet ghastly
presence during the song, leaves you cold-sweated, unable to establish your final notions and distinguish, whether you feel angst or comfort…” – Quixotical Music psychoanalyst Vidas Stanynas.